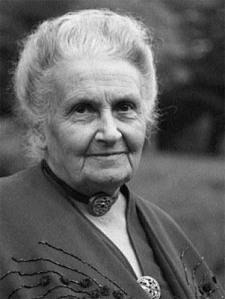 “Education is not something which the teacher does, but…it is a natural process which develops spontaneously in the human being.”

Born on August 31, 1870 in Italy, Maria Montessori was the first woman to graduate from medical school. She was one of the great pioneers in the study of the development of the young child. She had impressive credentials when she began her now famous method of educating young children.

Your browser may not support display of this image. With a background in Mathematics, Engineering and Biology, Dr Montessori was appointed assistant doctor at the Rome University Psychiatric Clinic. Her work during the next three years with mentally challenged children reflected not only deep compassion but also a rigorous scientific quality.

In her medical practice, her clinical observations led her to analyze how children learn, and she concluded that they build themselves from what they find in their environment. Shifting her focus from the body to the mind, she returned to the university in 1901, this time to study psychology and philosophy. In 1904, she was made a professor of anthropology at the University of Rome .

Her desire to help children was so strong, however, that in 1906 she gave up both her university chair and her medical practice to work with a group of sixty young children of working parents in the San Lorenzo district of Rome. It was there that she founded the first Casa dei Bambini, or “Children’s House.” What ultimately became the Montessori Method of education developed there, based upon Montessori’s scientific observations of these children’s almost effortless ability to absorb knowledge from their surroundings, as well as their tireless interest in manipulating materials. Every piece of equipment, every exercise, every method Montessori developed was based on what she observed children to do “naturally,” by themselves, unassisted by adults.

She designed the special materials and scientifically prepared environment she deemed essential for the meaningful education of her pupils. Dr. Montessori believed she could apply her revolutionary ideas to the education of the normal child, and to this end she embarked on a program of intensive studies at Rome University.

During her lifetime, Dr. Montessori was acknowledged as one of the world’s leading educators. Education moved beyond Maria Montessori, adapting only those elements of her work that fit into existing theories and methods. Her number one rule to being a good teacher was to “rigorously apply the method in order for the method to be successful”.

Dr. Montessori believed that no human being is educated by another person. He must do it himself of it will never be done. A truly educated individual continues learning long after the hours and years he spends in a classroom because he is motivated from within by a natural curiosity and love for knowledge. She felt, therefore, that the goal of early education should not be to fill the child with facts from a pre-selected course of studies but rather to cultivate his own natural desire to learn. Her experiments made the child the center of education; her program is adapted to the interest and the needs of the children. As a result, children concentrate with enthusiasm and achieve a real and profound understanding of their work. This intellectual progress is accompanied by emotional growth. The children become harmonious in movement, independent of work, and honest and helpful with one another.